The name translates to the River of January. Mt. Corcovado (‘Hunchback”), the highest point and home to the 125 foot O Christo Redentor  (Christ the Redeemer). And of course Sugar Loaf, Rio’s most recognizable landmark.

We arrived late due to heavy fog. And the fog and overcast continued to the point we decided not to take a Helicopter ride we had planned.

This is what we planned to see during the Helicopter we did not take: 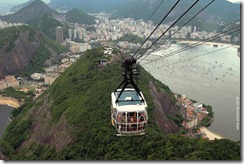 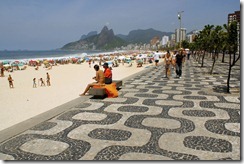 We were fortunate to have had a private fabulous tour in 2009 where we saw all the sights above.  The only thing Gloria wanted to do was the helicopter ride to Christ the Redeemer.  The cost was fairly high for this ride for only 7 minutes in the air.  On a clear day it would have been worth it.  Other passengers mentioned the samba dinner show which was really great.  So if we ever get back to Rio those would be the two things we would consider doing.

The weather was warm and there was no rain today.  We could actually sit out on the balcony and enjoy it.

We ate dinner in the Pinnacle Grill which was good as usual and quiet.  There was a movie playing in the showroom afterwards.  We decided to go back to the room and were asleep within minutes.