We are docking and have a shuttle to the Market and/or H. Stearn.

Last night we had dinner with George Geary Guest Chef, Lacey the ship’s Librarian, Nina the Rabi’s wife, Sue her friend, and Jim & Jessica Smith.  Our Aussie table mates were away for the evening.  George as usual was entertaining and Lacey was a delight.

As you will tell by the photos below, last night’s dinner was the preview to the “Black & White Ball” which followed. 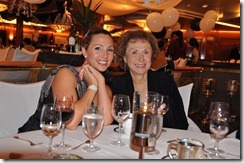 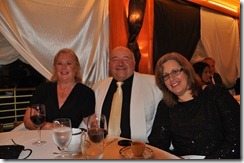 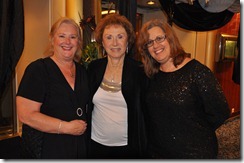 We returned to the room after dinner to a Brazilian gift:

Although it was a rainy day for us today, I do have a few photos we took last trip to Fortaleza: 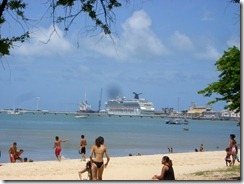 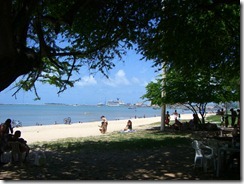 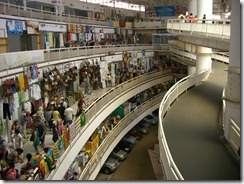 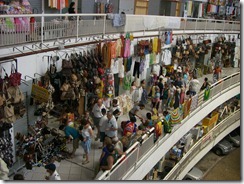 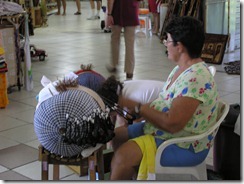 It has rained all day today.  Visibility has been poor or nonexistent.  A tour to the museum was cancelled earlier due to flooding.  People returning from whatever tour they took were happy and did not get wet until returning to the ship.  The Cruise Director announced there was flooding in town so that passengers may want to reconsider whether they still wanted to take the shuttle to town today.  We all agreed if there was a port that was going to have continuous rain, this was the port to be.  This is the first port on this cruise that Brad has not at least gone into town for photos.

As we were leaving the rain clear just enough to get these to pictures taken from our room: