Last night’s views as we cruised up the Amazon toward Santarem. The Amazon River is a wonderful sight as we are able to see it from our verandah.  We do not spend a lot of time on the balcony because it is HOT and humid.

Took a stroll around the ship and took pictures of some Art and Flowers: 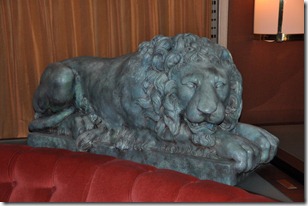 When we arrived in Santarem, this was the view from the ship:

In town:The following pictures that Gloria thought were great are:  The hammocks everywhere.  They all  have some sort of macramé on them which we have never seen before.  The man who made windshield sunscreen covers for automobiles out of cardboard and put them on cars as they parked for tips.  The little girl was so cute and the woman who said to Brad ”You are taking a picture of me?”  The church is beautiful and the large parrot coin telephone stand was unusual.  The dried piranha was just one of the pictures of piranha. 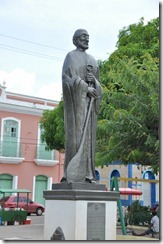 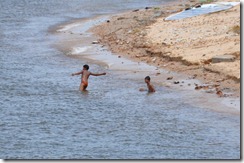 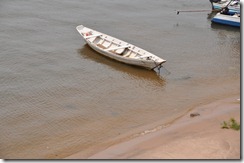 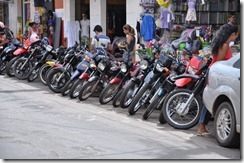 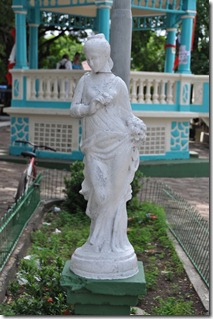 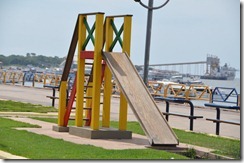 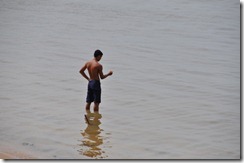 Meeting of the waters above shows the merging of two rivers and the different colors of their waters. 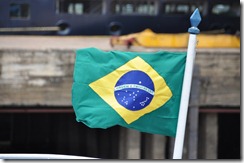 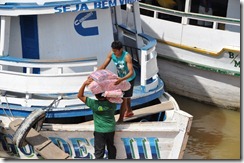 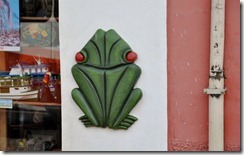 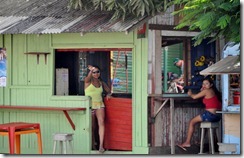 Our explorations speaker, George Sranko, gave a talk on the Amazon River and the jungle.  The River really does have anaconda snakes that are huge.  They are about 12 inches in diameter and up to 29 feet long.  According to George, no human has been eaten by one.  Many have been bitten, but not eaten.  Then there are all the piranha in different colors.  And again according to George although many toes and fingers have been bitten, no human has been eaten.  Also, there are really big electric eels.  Now if that isn’t enough for you George also told us about all the different plants in the jungle.  There are 500,000 different species of plants and there is a different species of bugs for each type of plant.  500,000 bugs.  Yuck!  For those of you that knows Gloria well, you know how she feels about bugs.

The ship has a policy that if a passenger buys any item made of wood, the ship confiscates it for 48 hours to freeze the item so that any and all bugs & insects in the wood will be killed and not been found crawling through our cabins.

So far, Gloria has not gotten off the ship.  Brad has disembarked to take pictures and has returned quickly because as he puts it “It’s HOT and humid.  Would we do the Amazon river again?  Of course.  Would we be getting off the ship more?  Probably not.

The sunset tonight was beautiful: